Permission to Be Powerful

Reasons to Claim Your Fierce Feminine Life
Get your FREE Download Here! 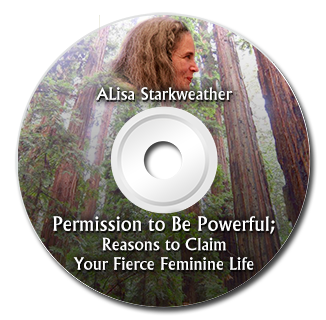 “The path to our inner Power can be challenging. ALisa has a gift for waking up our deep WomanSoulSpace so that we can remember. We can feel. We can be moved to cry, to scream, to laugh, to sing. She sings and drums and weaves the threads of our remembering. With ALisa, “experience” happens. We go beyond the words — beyond our ceaseless talking, beyond our highly-praised analysis and intellectual pondering, beyond the whole damn alphabet that we are drowning in — and taps our Souls. Wake up and Remember… Wake up and Remember… No more SleepWalking, no more SleepTalking… And we are changed. And there is no turning back.”
– Nicole Oxendine, WiseWomanConnections

ALisa Starkweather is the founder of many powerful women’s initiatives; the Red Tent Temple Movement, Daughters of the Earth Gatherings, the Women’s Belly and Womb Conferences, the women’s mystery school, Priestess Path Apprenticeship and co-founder of the international women’s initiation, Women in Power; Initiating Ourselves to the Predator Within. She is a Shadow Work and breathwork facilitator as well as a keynote speaker and life coach. Thirty-five years of dedication to women’s empowerment gave her a reputation where she is known for her passionate archetypal work that focuses on transformation, healing, community, ritual and the rebalancing of the sacred feminine.

ALisa began the women’s mystery school, the Priestess Path Apprenticeship in 1998 out of her belief that women are an important part of the change that we need today in our ailing world. She believes women need strong containers to embody an archetype that includes one’s power, spirituality, and innate gifts. Priestess Path is an opportunity for a woman to connect with the earth and to challenge her own belief of what is possible. Daughters of the Earth Gathering that happens in the summer with over two-hundred women is also a great way to connect with this vital network of women.

“ALisa Starkweather is a wondrous teacher who has a highly developed capacity to hold in her presence the largest scope of human emotion, i.e. the deepest sorrow, the most formidable anger, and the purest joy with copious amounts of compassion, love and patience. She is a healer who resembles a medicine woman, or a shaman. She is an endless resource of tools and techniques to help individuals move through their strongest blocks, deepest fears, or stifling emotions.”
– Nadine Sures, performing artist, Montreal Canada

She became a women’s empowerment facilitator in her mid twenties trained by her mentor, Sandra Boston, a woman twenty years senior to ALisa who was generous in sharing her years of wisdom and knowledge. Even before this however ALisa was teaching workshops and trainings pioneering gender work with her center Healing Gender Relations and her visionary ground-breaking work, The Ancient Dance Between Men and Women.

Believing that a pivotal part of healing means facing what one disowns, in 1993 ALisa began training to facilitate dynamic healing with both the unlovable and golden aspects of shadow. She became a certified Shadow Work® facilitator in 1995 and a founding member of the original Shadow Work® Guild.

ALisa is also the founder and visionary of the Women’s Belly and Womb Conference of which there is no other in the world. With collective healing ritual, council and celebration this conference honors all stories that womanhood embodies and aims to bring women together as a force to be reckoned with for global change by beginning to claim more fully the creative power present in the belly and the womb.

“I LOVE THIS BELLY CONFERENCE that you do, and I BELIEVE with all my heart that if we as women know and love our bellies, it will transform this society. I am in particular distress about the disconnection from the womb that is so prevalent today and how that impacts childbirth. If women of the world could take back their power in birthing, WHAT a revolution we would have. It is the very foundation of everything.”
-Maria, Houston, Texas

In 2000 she co-founded and designed an international women’s initiation, Women in Power; Initiating Ourselves to the Predator Within. Women in Power is radical work using Shadow Work, ceremony, and initiatory container to liberate women from the perpetrator/ victim cycles that often barrage a woman’s outer life and inner psyche. This work bravely addresses the darkest places that a woman endures and through a courageous process aims to restore her inner safety, dignity, joy, and even healthy sexuality by rewiring the relationships to the predator and prey dynamics within.

“ALisa has the power to hold the unwavering attention of a large group and the intensity of focus and attention to connect heart-to-heart with individual women. She challenges old assumptions about women’s power and place in the world with her dynamic, experiential work. Hers is the gift of awakening women from complacency, fear and self-doubt. To hear her is to be moved and transformed.”
– Becky Schupbach, Executive Director of Women in Power

Daughters of the Earth Gathering; a Women’s Tribal Event was birthed by ALisa in 2005 after a vision she had of bringing women together on the land and off the grid with five elemental women’s temples. What is important is that the many diverse women come together on sacred land to be in ceremony, council, heal and move forward with inspiration, hope and courage. A number of invitations are given each year to women of color because of her belief that we are not whole unless we are bringing our many sisters together for the important dialogue and collaborations of this time among our diverse communities. Some day she hopes to found with others, Building Our Sisterhood Bridge where we bravely face the healing of fractures among us as women.

More recently over the last several years she is carrying her vision out globally by women raising a Red Tent Temple in every village, city and town. Her inner mandates was to bring forward a vibrant grassroot movement which brings women’s energies into action inside of our local communities. She believes that women are ready to be the change in our society where we will not only value women and the journey of womanhood but also to support the greater changes being called for in our culture today. The Red Tent Temples hold the possibility for women of all ages to unify and strengthen. For 3.5 years she worked as a co-producer of Things We Don’t Talk About; Women’s Stories from the Red Tent with filmmaker Dr. Isadora Leidenfrost and film music scorer, Ruth Mendelson that debuted in September of 2012. This award winning film has now been viewed by over a million people around the world and translated now in to several languages.

“ALisa Starkweather is truly magic, deeply wild, and contagiously empowered. She has offered me personally, as well as countless women and men I know, profound renewal of faith and spiritual transformation. She has the ability to stir the hidden, undeveloped, wounded and long neglected parts of our souls into positive action. When ALisa has the opportunity to lead people in ritual or interactive workshops there can be no doubt that The Great Goddess Herself has charged her with the vital, timely work of awakening human beings to the mysteries of the Sacred Feminine. This is joyful news for there is much mending, peacemaking and beauty to create. Most importantly, the Earth relies on people to know her sacred nature and all people rely on Mother Earth. I am deeply grateful ALisa has chosen to commit herself so completely and successfully to her life’s purpose.”
-allison Wonderland

She has three recordings of her original chants, Daughter of the Earth, Calling Us Home and Women Rise Up and is an inspirational teacher at many conferences and gatherings nationwide. Besides the women’s work that ALisa is avidly involved with, she also had years experience in pioneering gender work. As a certified Transformational Breathwork facilitator, she leads large groups in breathwork and healing rituals that focus on compassion, dialogue and multi-perspective thinking. On rare occasions she is available for personal work or phone sessions. She has taught online her five week course, Answering the Call; Birthing Your Fierce Feminine Life which will soon be available as a product in 2016.

The many visions that she has brought to life each have their own distinct mission and her overall network of Women Rise Up where that women who are ready can come together and love fiercely in a time when women’s hearts are urgently needed. Her hope is to bring another vision alive in 2016, Building the Sisterhood Bridge which will be a seminar/tour developed for the roots of where women are needed to shift global paradigms by our own collective readiness for change.

In her desire to share the many stories and visions she has lived among women, she has contributed writing in the anthologies, Women, Spirituality and Transformative Leadership; Where Grace Meets Power, Stepping Into Ourselves; an Anthology of Writings about Priestesses, and Voices of the Sacred Feminine; Conversations to Re-Shape Our World.

She welcomes you to be in touch with her and be part of the movements of women that are shaking the trees.

“ALisa is an exquisite role model and guide for a person to learn how to craft a life infused with beauty, love and spirit. She supports women to access their core selves and commit to living a life fully by manifesting their true potential.”
– R. Thompson